95% of science teachers in Texas are football coaches. 4% are lesbian girls' basketball and volleyball coaches, and 1% are other. These are their stories.

Throughout Junior High and High School, I had a total of seven science teachers from basic science to advanced chemistry. Only one of my science teachers wasn't a coach. Only one was a female. And yes, she was a coach, I'll let you draw your own conclusions. My 6th grade science teacher was Mr. Gordon; young, relatively fresh out of college, and also an aspiring football coach. They take any teaching job until they can land a coaching/teaching job, so teaching usually isn't their primary focus. Mr. Gordon was different; he was a true science geek. He loved meteorology and watching the skies for tornadoes. Freaked most of the kids out. He was also extremely blunt. We were in the primary blast zone of Pantex, home of the nation's nuclear bomb arming operations. If anything went BOOM at Pantex, duck and cover was just a formality. Mr. Gordon went into explicit detail explaining the science behind what would happen to our tender little bodies in a nuclear blast. Really put tornadoes into perspective.

Then came junior high and Coaches Schneider, Tversky, and LaGrone. Coach LaGrone now owns the largest funeral parlor in Amarillo. Schneider was a hoot, Tversky made me dissect the brain of the fetal pig which is why I didn't eat pork for 20 years, and I spent a year in Physical Science watching Coach LaGrone try to solve a Rubik's Cube.

High school was interesting. I had enough credits to graduate a year early, but the school counselor wouldn't let me. Said I was too immature to go to college at 17. Doodyhead. I showed her by CLEP-ing out of two semesters and starting college as an 18-year-old Sophomore. Anywhoo....where was I?
Oh yeah, high school science teachers. My physics teacher was the very brilliant MS. Camden, volleyball coach and surprisingly smart scientist. She saw the court in terms of physics and was the winningest VB coach in the school's history. I really enjoyed her class even though I never understood a thing that was going on. Same for her "best friend's" classes Calculus and Trigonometry. Makes you wonder what the pillow talk was like.

My absolute favorite science teacher was Mr. Finis Brown, Advanced Chemistry. He was about 60, short, chubby, bald round head and round glasses. Here's a fairly accurate representation of Mr. Brown and me in my Senior year: 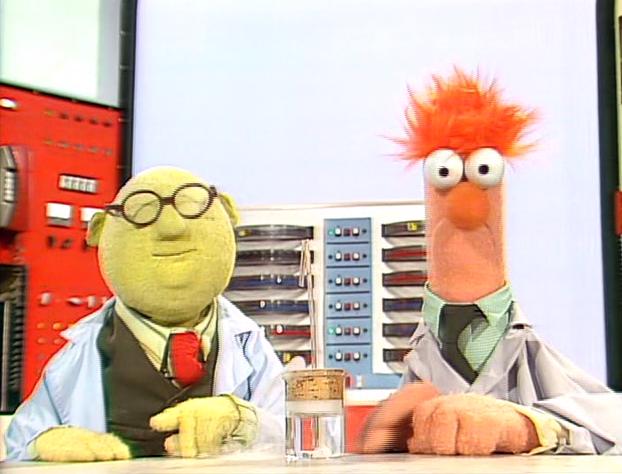 I swear to God and all that's Holy, Mr. Brown looked just like Dr. Bunsen Honeydew. Sounded kind of like him, too. I enjoyed everything about chemistry, mostly that chemicals don't have guts, but it made sense to me. Everything had rhyme and reason and balance. I came very close to majoring in chemistry, and if I had it all to do over again? I'd probably be a meteorologist.

Posted by hiswiserangel at 5:25 PM

my coaches taught math, basic Jr High science, world history and physics...I grew to love my badass high school football line coach. Coach Scott taught World History (he made Henry the VIII and his wives a macabre comedy) and physics (what a combo). My high school biology teacher, Ms Fannin was 6' tall,and then she wore 6" heels...she SHOULD have been a football coach. All in all, my science teachers helped me sail thru college sciences (what few I took) with minimum effort, and I am forever grateful...and for the record, in a "do over" I would major in finance and would now be filthy rich....or bankrupt....

Love the post. I really enjoy the personal stuff.

You didn't eat bacon for 20 years? Holy crap, does Wirecutter know about this?

After 24 years as a meteorologist, I wondered what other path I could have taken. Then I realized that since I actually enjoy standing up in front of large groups of people and based on circumstantial evidence, prognosticate about future events...I could be a Weather Forecaster or a shady investment councilor. Considering where Bernie Madoff is right now I am happy I chose Weather. Also the fact that you can be wrong 25% of the time and not loose your job!

I wasn't allowed anywhere near a chemistry set after the Thrift Store Incident.
Wait..... did you say you were pork free for TWENTY YEARS?

What did you learn from the lesbian?