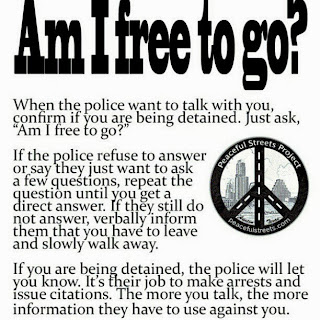 All over a little Keltec .38 semiautomatic. And a woman who couldn't shut up. But it all started with registration. I mean, how else would the officer have known he was a gun owner BEFORE he pulled the man over?

Take your BP meds and prepare for battle....

h/t to jesse in dc, who lives in the belly of the beast. God speed, jesse.
Posted by hiswiserangel at 3:00 PM

We have our vehicle plates flagged in NC if you have a CCL as well; I have never been asked if I was carrying when presenting it during a stop. I ALWAYS inform the LEO if I am carrying, but never have had a problem.

This officer was WAY out of line… having a LEO in the family, I understand and respect the desire to come home alive to his family, but my brother also was raised with common sense.

lol - I was pulled this morning on the way home from work by a State Trooper; I know that he knew I was had a CCL, but between the open window, hands in the clear and not being a [moron], there was no reason for him to alarm. He was rewarded with my sleepy face and caffiene-less responses; I got off with a chuckle and a request to "please slow down - get outta here".

Still I know this is tragically not the norm across the country.

Badger, from reading the article, I understood that he hadn't committed an infraction, not even speeding, but that he was targeted specifically for being a gun owner.
That's a bit more than out of line.

The next two years and beyond will be much worst.

Whoops, I thought I read it thoroughly… corrected - sorry.

I love all the comments about suing the cops.

Yeah, right. If that happens, they'll make sure it goes in front of a fascist judge who'll rubber-stamp everything the cops did. Anyone doubt me?

That is some world class bull shit right there . . . damnation!