Some of this still applies 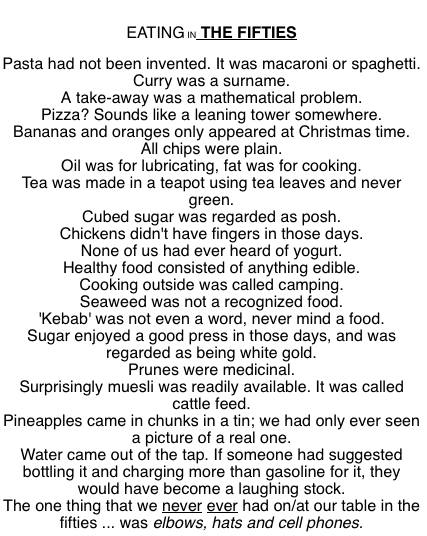 Posted by hiswiserangel at 5:30 PM

If we could turn back the clock to those times we would be better off! People who snuck across the border were called wetbacks instead of undocumented workers! Gays did what gays do with the doors shut and the drapes drawn closed and didn't have parades celebrating their perversity!

Amen. Miss those days. A lot.

and we survived em and thrived...lesson there somewhere....

Pasta, by that name, has been around since at least 1154.
Curry has been in cook books since at least the mid 1700's.
The first pizzeria in the United States opened in 1905, but prior to that pizza was sold by street vendors. Pizza really took off thanks to WW2. Our soldiers in Italy discovered what an awesome food it was and upon returning, it went from an Italian to an All-American food.
Prior to 1950 the Cavendish banana was almost unheard of. However, the big Michael was quite popular. Fact is, winter was a bad time for bananas because cold temperatures inhibit ripening.
Spud Murphy developed the method for seasoning chips in the 1950's. Hey, one right!

I came along in the 70's, and never did get the hang of "no elbows on the table".

I have to agree with JeremyR; whoever wrote that did NO reasearch. Chinese take out was common in New York (see MY FAVORITE YEAR for a cultural reference) and you run into instances of it in popular culture about LA and 'Frisco in the 1920's and 1930's. The West has known about green tea for one hell of a long time, we just prefer the black kind. Kebab was indeed a recognized food; in fact if your mother read a 'woman's magazine' of the era you could pretty much assume that she would see at least one Kebab recipe in a year. Cooking outside was called Grilling, and every suburban dad was assumed to do it. The Weber kettle comes from the 1950's.

In fact there's very little with that list that's RIGHT.

Being italian my frandmother used to make a dizen different pasta types in the 50's.

Those were the good days!

Regarding the last line, that's three things, not one. Just saying.

Other than the use of the word gasoline, I think this is England in the 1950s.

The writer of the list is obviously British. Take-away is the British term for take-out, likewise cubed sugar rather than the North American sugar cubes.

Actually, chicken fingers were well known, but only by chickens. They used them to scratch their nuggets!