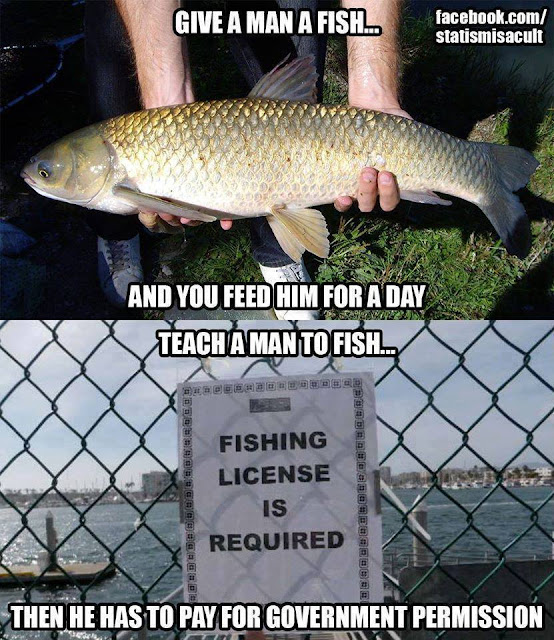 Posted by hiswiserangel at 1:30 PM

I've been a fish biologist for 30 years. I take offence to this. It is well known that the "Tragedy of the Commons" will allow us fishers to take every last fish until they no longer exist, if given the opportunity. I dare anyone to prove me wrong. Fisheries management and conservation is intended for the continued existence and proliferation of our fisheries resources. I have worked for 30 years to facilitate this goal. Anyone who thinks otherwise, is either ignorant, a poacher, or just plain stupid.

How do you really feel about it, Sarthurk?

it was hunters who finally persuaded the governments to have seasons and bag limits.....

Old Cowboy is quite correct. It turned out to be a double edged sword, so to speak.

ummmm....ever try to give someone a carp??

sathurk, justify your statist fetish how ever you like so you can sleep at night.
It is a weak minded fool that wishes violence on his fellow man at the end of a government gun.
many of our most dangerous laws are for our own good so to speak.
I trust your income has been at the expense of the good tax payers as well, making your outrage all the more comical.
contrary to what you have been taught in government schools mankind can and did come up with social norms and limits on hunting, fishing, trapping. To preserve them for the next generation, where they went wrong is getting the government involved.
you want to know what government is, look up the definition of a parasite. and you will have your answer.