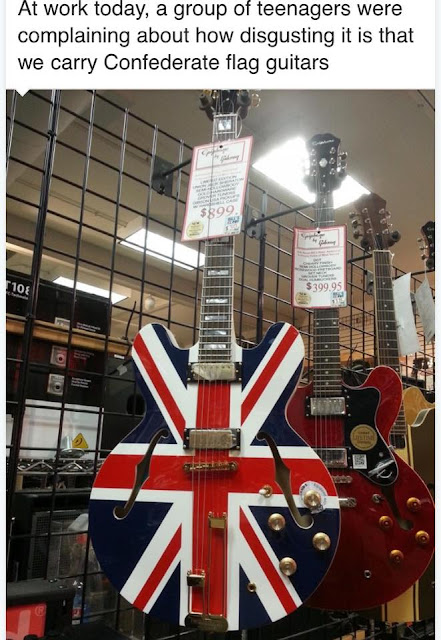 Posted by hiswiserangel at 3:55 PM

Yeah, I thought so.

That flag is more of a symbol of slavery than the Confederate flag ever was.

Just hit them in the head with it; it'll be a more meaningful conversation, I promise...

Hey, that's my flag! And there's been a damn site more good been done under it than most (and equal to any – Volfram better check to see just which nation stamped out slavery around the globe before making that kind of comment too ;-p ).

Yeh, I know what you're sayin' but going all “look they were just as bad/worse” is just playing into the SJW's hands. If someone here pasted a pic of the Stars & Stripes in such a comment, it would be unacceptable to most there … and here.

As an outsider, a damn furiner, I see the Confederate flag brouhaha as similar to a certain flag here. The St. Georges Cross, the flag of England. It was used by a tiny minority of extremists (skinheads and BNP types for a time) and was associated with racism, etc. by …. a tiny minority of vociferous SJW (let's wear a Che/hammer&sickle shirt to be cool) types. They've just found something else to winge about, without knowing, or caring, a damn thing about the facts.

Well guess what? That flag represents to the majority exactly what it should, pride and patriotism in the country (patriotism is, a justified I think, pride in my country, not necessarily in its leaders past or present or even to recognise, and regret, some of the bad done in its name). It does not represent what a tiny minority think/imagine it should – and just who gave them the right to specify what others think anyway?

[Climbing carefully off my soap-box again]