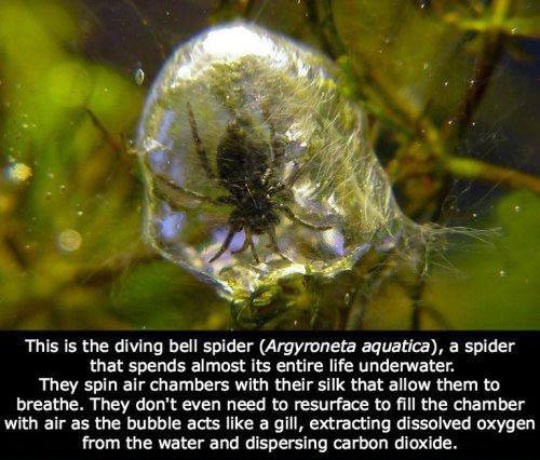 Posted by hiswiserangel at 11:01 AM

This is actually one of the coolest things I've ever seen about bubbles and I've often wondered if there was a way it could be scaled up.

They have special hairs on their bodies that capture bubbles that they take with them when leaving their homes, too. The spider has a built-in aqualung.

Hey! be nice to God's creatures. After all, you, Angel, are one of them!

There is a theory going around, that the reason that most people have such a aversion to spiders is because spiders are not native to Earth.

And we humans think we're clever.

So you mean the next time you are swimming in the 'crick' and you think you feel something brush your leg, it could be one of these ?

Maybe that was the inspiration for Jesus Christ walking on water ...

But that is a cool factoid, freaky but cool.

Explain how that gradually evolved.