Ginger is the spice of life 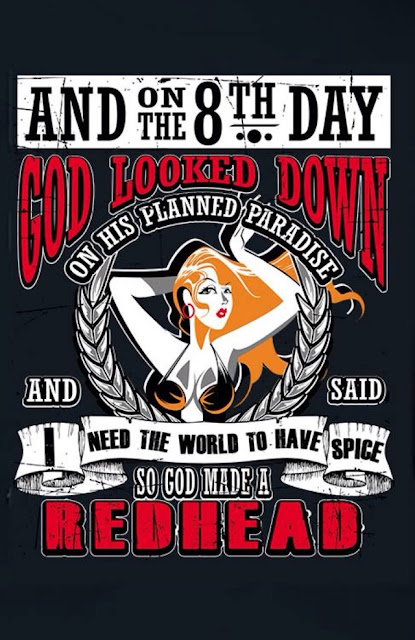 Posted by hiswiserangel at 3:08 PM

Since Adam and Eve were created on the 8th day, then that makes Eve a redhead.

Now THAT explains a whole lot about the trouble in Eden.

Depending on the version of the story that could make Lilith a red head.

So, what about Ginger Snaps????

Adam was created on the 6th day. Eve doesn't have a specific date, but I was always of the idea she was blonde.

Obviously, Lilith was the redhead.

FWIW Guys that can/have read the Hebrew manuscripts say that it is clear that Adam was created after the day of rest and not during the 6th day.

Oh yeah, sure, if you're going to take the verses out of context you can make them say anything you want, but if you're going to say that just because Genesis 2:4 and on are written after the account of the 7th day, then that means that there were no shrubs or plants yet either, while according to Genesis 1:11-13, plants had been around for 4 whole days by the time of the day of rest.

If we're reading the account of the 6th day, then it says God created all the livestock and other land animals, and man(male and female), and *then* the sixth day ended, and then at the very beginning of Chapter 2, it says "By the seventh day, God had finished the work he had been doing." Nothing new was created after the seventh day. If it had, God wouldn't have been finished by the 7th day.

Besides which, what "other races" are you talking about? Because it says Man was created in God's image on the 6th day.