At least they all went home alive 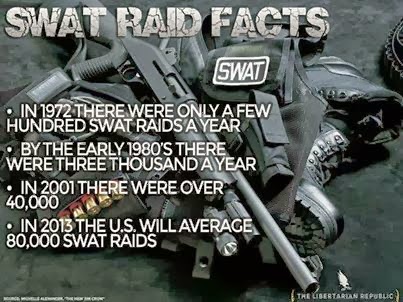 East Dublin, GA — Acting on a bogus tip about methamphetamine from a car thief, the Laurens County Sheriff’s office obtained a search warrant for the home of devoted husband, loving father and grandfather, David Hooks.
An hour after the judge signed the warrant police raided Hooks’ house and took the life of this innocent grandfather.
An attorney representing David Hooks’ widow says that the September 24, shooting did not go down as law enforcement authorities stated in initial news releases, and the “true facts of this tragedy are in stark contrast” to official accounts.
At approximately 11:00 pm on September 24, Laurens County Sheriff’s deputies barged unannounced into the home of Hooks. The sheriff’s office claims Hooks was shot after he got out a firearm and started showing aggression. Hooks was met with 17 shots from SWAT officers.
Since the Free Thought Project initially reported on this killing by police in October, recent revelations show that not only were no shots fired, but the shotgun wasn’t even loaded. Even if the shotgun would have been load and Hooks would have shot at the officers, he had every right, as he was protecting his wife and home from, who he perceived to be unannounced intruders, who obviously meant him harm.

Raids like this have GOT to stop. Period. They are designed specifically to put citizens in harm's way, forcing us to either completely surrender our rights of liberty and self-defense or face execution without trial. And the crux of all of these stories? The fuel to the fire? The War on Drugs, the biggest money-making scheme ever perpetrated by The State on the American People. It's not about saving us from drugs, it's about seizure of assets and keeping the prison and law enforcement complexes fully funded. Big money there.
Posted by hiswiserangel at 6:49 AM

First, they need to put a end to "qualified immunity". If the sons of bitches can be personally sued for their actions, maybe they will put a little thought into their actions.

Getting a tip from a criminal should not be probable cause for a warrant. They will tell the coppers exactly what they want to hear to get a reduced charge. It's time to teach the coppers the same thing that applies to every citizen that carries a gun. Every bullet that leaves that barrel has a lawyer attached to it.

If some judge signs a "no knock" warrant, he should be the first one in the door, followed closely by the county attorney. The first judge shot going in would put a stop to that shit.

It will not stop til we make it stop.Robert is exactly correct. Who decided there is "Qualified Immunity" anyway? They take the easy way out, get a tip, fire up the TWAT team... Oh, killed a citizen? Tough shit. How about some you know, actual police work? Investigate the veracity of the story? How about knocking on the fucking door and serving a warrant? My home is not Fallujah dammit. We, as citizens need to hold the Judges (where elected), prosecutors, Police chiefs etc accountible. Vote them out. Sue the departments out of existance. THIS IS OUR COUNTRY, and we have the power, if we will take it back.Never forget that.

Jesse, too many people are more worried about American Idol than the fact that the police in their town just killed a innocent person. The sheep just keep right on grazing and never notice that the heard is being thinned behind them.

Every time something like this happens a few more sheep leave the fold. Heck I was raised to respect Lawnorder like most folks my age. This crap is out of hand.
When Congress decided that alcohol prohibition was to become "law", it required a constitutional Amendment. Why? Because the GD government does not have the power to deny free citizens access to "things". So where do they get the power to even HAVE a "war on (some) drugs'? A lot of what passes for "law" in the US today is nothing more than made up powers, that have become "custom" It's BULLSHIT. I realize the Justice system has become totally corrupted by the money and power, but the bottom line is the US still belongs to We the People, and we still have the final say. And we have to make sure they hear us...