*Law enforcement ain't one of them. 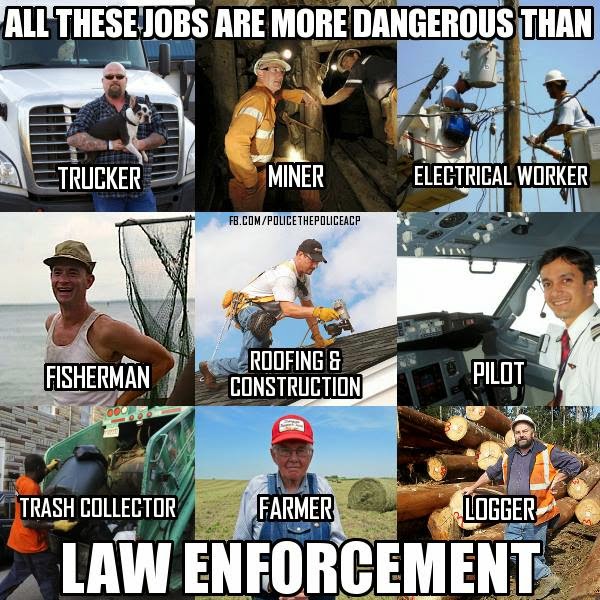 We are constantly reminded via politicians, television, and the mainstream media in general of just how brave those “boys in blue” are to work in such “dangerous” conditions. The thin blue line, we’re told, is akin to storming the beaches at Normandy.
But do these claims of mass danger and death hold water? Is it really necessary to smash an elderly woman’s face into the ground, so you can “make it home to your wife and kids”?

Posted by hiswiserangel at 11:56 AM

I wanted to be a cop when I grew up, became a MP in the army. I had to deal with civilian cops while on duty, after discharged I didn't become a cop, what a collection of vile, cowardly, scum of the earth, kinda like the cantina scene in Star Wars....

Anything with an enumerated list looks like click-bait. They could put them all on one page but make you click through them one at a time.

This has been known for years. Cops, and to a lessor extent firemen, like to tell everyone how DANGEROUS their jobs are. Well, no. Not really.

Being a fireman is more dangerous than being a cop.

I deliver pizza 3 days a week, that's a more dangerous job than being a cop. Where else can you make a phone call and have your victim come right to you. Taxi drivers are higher on the list than cops. That's another job where you can call your victim and have them come to you.

They just FEEL that they are in danger. That counts, doesn't it?

I've been following your blog for several months now, but this is my first time commenting.

I think you are comparing apples to baseball when you compare those unsafe jobs to law enforcement. Most of the deaths related to the jobs in that top 10 list are due to not following good safety practices, and the workers in those jobs have a lot of control over that. A trucker may be heavily pressured by his employer to keep driving, even though he knows he hasn't slept in 24 hours; a miner may be fired if he doesn't go work in an unsafe mine, but the final decision to keep working rests with them.

That's not so true for law enforcement. A LEO can do everything right and still end up dead. Their job is to enforce the law on those who have chosen not to follow the law and are willing to fight.

This is a considerably more dangerous work environment than any trucker or fisherman has to work in. None of those top 10 jobs require courage to face on a day to day basis. About the only time courage is needed is when they stand up to their employer and say 'No, that's not safe, I'm not going to do it!'. LEOs, however, have to go into situations every day where there is a chance that they loose all control and someone ends up dead.

I am not excusing the poor behavior and abuses such as the one you've linked. An officer that acts that way should be punished to the fullest extent of the law. I also don't think the trend to up-armor is necessary, but I do understand their compulsion to do so.

There isn't much logic to comparing law enforcement to any of those top 10 jobs and saying more risk is involved in trucking or mining or fishing.

Pete, you've obviously never been in any of those jobs, so I'll excuse your dismissal of their courage.

When you drive a tanker full of 6000 gallons of hazardous material through metropolitan traffic on an interstate where dipshits and assholes cut you off, and you know if you don't respond appropriately and in time, a whole bunch of people can get hurt or killed, then you can tell me it doesn't take any courage.

A lot of cops buy their own press, internalize that fear, and escalate situations unnecessarily. All we're saying is take it down a notch, Rambo, not every citizen is gunning for you.

There may be a time and place for LEOs to act like an occupying force to the citizens that have their money taken at gunpoint to pay them.But not every situation. The LEOs show less and less respect for us, referring to us as "civilians" No shit eh? I am a CITIZEN thank you, AS ARE THE COPS. Cops are "civilians"too...Every over the top thing reported or caught on camera reduces the respect that the average citizen holds cops in. Every dog gleefully dispatched, every wrong door raid...
Shame too, in the looming unpleasantness to come, you'd think they would be on "our" side, and vice versa...

Pete, I come from an area where logging is a major industry. The main cause of death and injury is trees with hidden internal flaws that split during felling or fall before they should.

Excessive safety regulations cause more accidents and death. Now we are at the point where they are written and enforced by those who dont or havent worked in the industry (paper pushers and beancounters).

Also the main purpose of regs is to increase $$ for the state. Thats why state and fed regs overlap and contradict, making it impossible to be in 100% compliance.
"Its for the children" & "its for your own safety" is always the excuse for control.

We have customers in 5 of the 9 industries shown and not one has anything good to say @ our state of regulatory control.