Where to go and how to get there 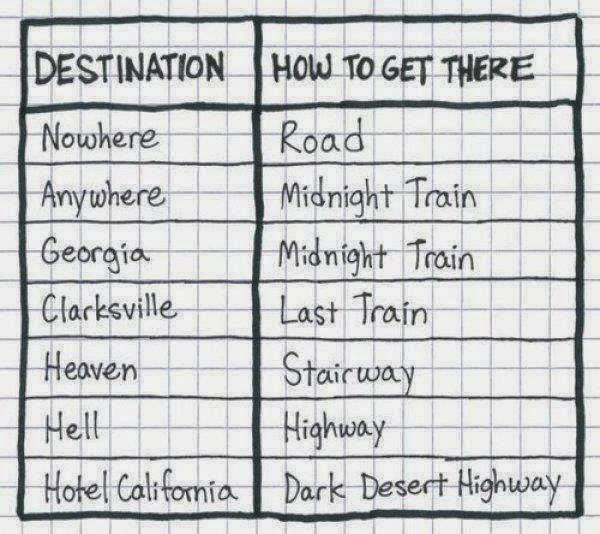 Posted by hiswiserangel at 3:52 PM

Ok, score me 4/7 there. Some old favourites mixed with some total strangers.

Really? Which ones are you missing, Bryn?

Yep been there done that.
Hotel CA has great room service. But I'm still trying to leave after over 30 years of being straight and sober! Still can't find the door! LMAO
Heaven and Clarksville still have a restraining order out against me.
And just for the record it's Anywhere, Georgia. And that train ride is a bitch! Stops everywhere, coal smoke in your face, baby's screaming, drunk woman playing strip poker! It's a rough ride! You catch the train to Anywhere from Nowhere BTW.
Hell won't let me back in after that last Frat party!

I'm also pulling 4/7, but I'm positive I've heard the Clarksvile one and the Nowhere one. I just can't remember them.

Don't mess with a former DJ.


My 4 were:
"Midnight Train to Georgia"
"Stairway to Heaven"
"Highway to Hell"
"Hotel California"

Just been listening to "Don't stop believing", sure I've heard it before, enjoyed it - just could not remember it!

"Last Train to Clarksville" - I was only 3yo! Heard it played over the years....

it may be a highway to hell, but it is paved with good intentions..... Or votes for dumbocraps.