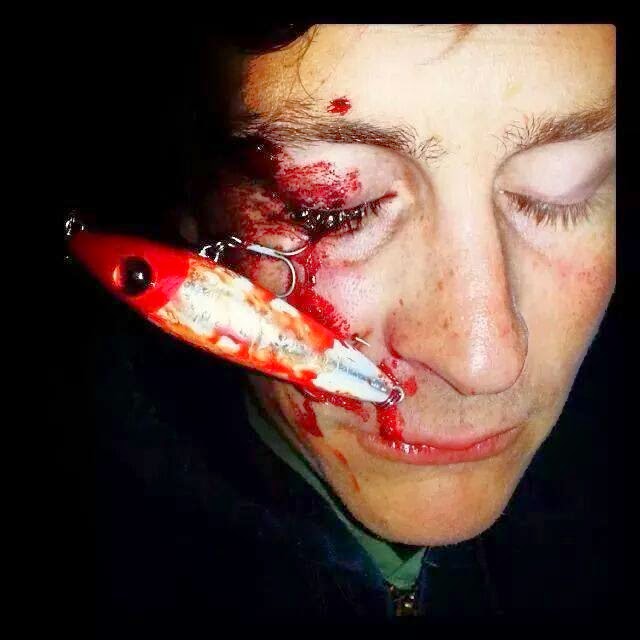 Posted by hiswiserangel at 1:35 PM

The clinic @the Kittyhawk NC.has a cork board with a hundred of those.It's called the wall of pain.

The worst I ever did was a hook in my ear when I stood too close to my dad as he was casting. We only went to the ER because the damn thing was, well, hooked in the freaking ear!

I thought that was a new midtown trend at first.

This is why you wait until AFTER fishing to burn one. Getting the munchies can be a bitch when fishing.

I let others catch the fish and clean the fish and mostly cook the fish as well. I'll step in when the eatin' needs doin' cuz a man needs to know when it's time to step up.

The only one that got me besides barbless hooks was a lazy Ike I stuck on the edge of the shelf in front of my workbench. I reached for something behind the Ike, and the barb was killer. I could tell by the other two. No pulling it out. I pondered the "Line pull" ? technique. Decided to push it through and snap it off with a dike, sorry girls, it's a tool (well maybe I shouldn't say it that way). The problem was that I couldn't get it to come back out through my skin. Enter the Exacto knife and strike anywhere match. One simple incision in the right spot, unt zer gut! No trip to the ER, Hydrogen peroxide before and after the surgery, TAB ointment, and a band aid. I was really pissed that I had to ruin a perfectly good collectable fishing lure original treble hook.

It's getting harder and harder to be a cool hipster nowadays.

When I was learning to fly fish, Mom pulled a shitload of poppers out of my back. I was 12. In 1967, you didn't go to the ER, Mom removed the hook and dosed you down with Mercurochrome. It didn't take a lot of trips to the kitchen to learn how to flip that line and not catch myself.