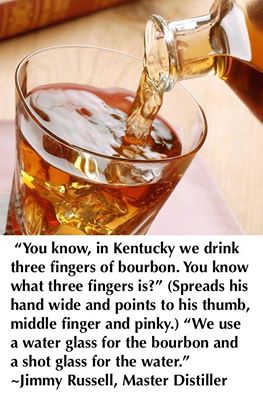 Posted by hiswiserangel at 2:50 PM

Bourbon on ice in the summer 60/40 with "branch" water. Or just do what I do and drink corn likker. That what bourbon was before the queer boys "found" it. Corn whisky in a white oak keg. AND "Aging" whisky is more myth than truth, good whisky is smooth the day it comes out of the worm. Oak is just a flavoring agent. The charcoal will remove some of the aldahides (spell?) but if made right the whisky will start out as good as any top shelf you have ever tasted.---Ray

"Let's see 'em make Kentucky bourbon racist"
Couldn't be easier.
Bourbun is made in Kentucky and Tennessee.
Those two states were in the Confederacy.
Most, if not all, distilleries that make it are owned by white men.
Southern white men are by definition racist.
Anything made by racists must be racist.
Ergo bourbon is racist.

See how easy it is to think like a leftard when you do without sanity and intelligence?

just FYI, Kentucky, while furnishing men and supplies, was a border state that did not leave...Tennessee, was all in....and bourbon is not racist...malt liquor IS racist....

VonZorch I hope you read this : Bourbon whisky is by law the product of the Commonwealth of Kentucky. No other product made in any other state may be called Bourbon whisky. By law and copyright, all products called "Bourbon whisky" MUST contain no less than 60% Kentucky corn whisky aged in single use charred white oak kegs. Any whisky made in any other state or country may NEVER be used as, or called by, the copyrighted trade name "Bourbon" a name unique to, and property of, The Commonwealth of Kentucky. And now you know-----Ray

Well, in fact it *could* easier: it's called Kentucky Straight Bourbon, isn't it? That's racist. Politically correct would only be a Kentucky Queer Bourbon. :-)