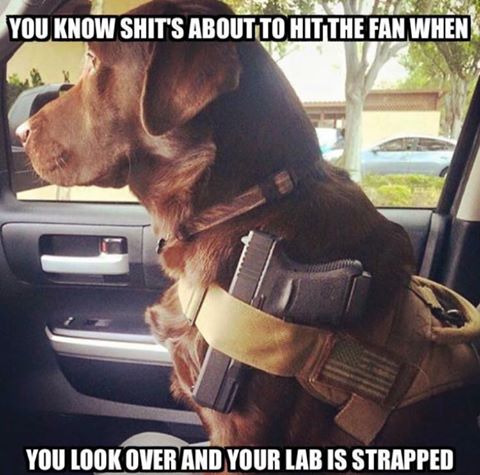 Posted by hiswiserangel at 4:35 PM

much better than the St. Bernard's with their little whisky keg....this can be a REAL survival aid....


I wouldn't trust my dog with a gun.
He's kind of an a-hole.

Plus, he'd probably end up robbing a McDonald's.
That's where cheeseburgers come from after all.

Looks like a seeing eye dog harness. That means the gun is really for a blind man. I feel a lot better.

East Of The Pecos said...

Chocolate lab with a gun. I've had 2 and neither one was smart enough to know which end the bullets come out of. Not to mention that they were both gun shy. The one I have now runs when he SEES a gun. When my neighbor or I are out in the yard shooting, he is trembling under my desk. What a pussy!