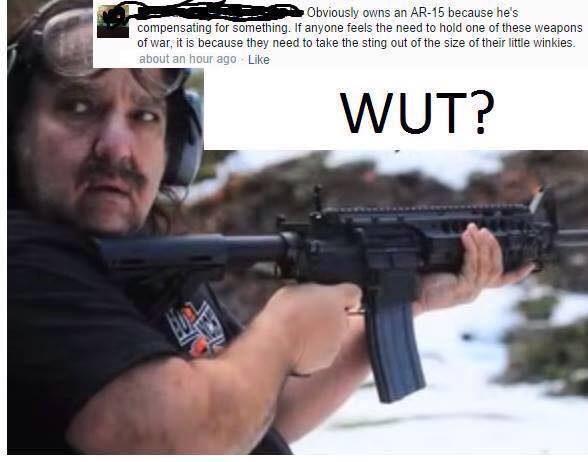 Posted by hiswiserangel at 4:28 PM

Whip it out Ron and make them cry.

Ron getting ready to whip another pussy into submission.

If someone thinks a gun is a substitute for a penis, then they are using one of them very, very incorrectly.
-LazyBikeCommuter

Personally, I'm of the opinion that firing the right gun will give even women a raging erection.

The Tweeter has obviously lead a sheltered life...chewing on paint chips!

That made me laugh so hard I almost pissed myself.

(Laugh my mother fucking ass off)

Have actually met and partied with the guy.

A real fun dude when drinking. (and we drank a LOT).

Very popular with the ladies, even though he is ugly as sin. Real popular.

Trust me, I've seen it, he ain't gotta compensate for nothin'.

Everyone's led such interesting lives, and here I am,
boring soccer mom.

Wise Angel One, with all the BS you have seen and instigated on here,boring is not one of adjectives I would use to describe you....

She ain't fooling me. Us scorpios are pretty much the same...our horns hold up our halos.

I can't think of anything more useless than a halo. Unless of course you're looking for something in a dark closet.

The guy must be pissed because his wife won't let him have one.

Yeah, that's the kind of woman I want to be married to...

The guy must be pissed because his wife won't let him have one.
You mean an AR15 or a winkie?