Has anyone else noticed the dropping of the term "immigrant" in favor of the term "migrant"? Has anyone wondered why? The term "migrant" was traditionally used to describe people who moved within a country's borders. Migrant workers. Migrant gypsies. The understanding was that they were already in the country, they were just moving around; the implication being that these people were legitimately in the country. Immigrant was traditionally used to describe people who moved from one country to another, across borders. The word immigrant could be prefaced with either "legal" or "illegal" indicating the legitimacy of the person's border crossing. Pretty clear, huh?

So you had migrants, people legitimately in the country who move around. Legal immigrants, people who move from one country to another in accordance with the country's immigration policies. And illegal immigrants, also referred to as illegal aliens, people who move into a country without permission, against the country's immigration laws. These designations have been very useful to us in the past, so why drop them? Why use the more legitimate, benign term "migrant" to cover all? Why muddy the waters? Who made this decision? The media? The governments? When you remove the term "immigrant", you essentially remove borders. If all are merely migrants, then there really are no borders.

We need to get back to plain talk, politically incorrect honesty. Call a spade a spade. Wait, was that racist? Oh well...

If you are in a country without legal permission, you are NOT a migrant. You are an illegal immigrant. Or for short, just plain illegal. 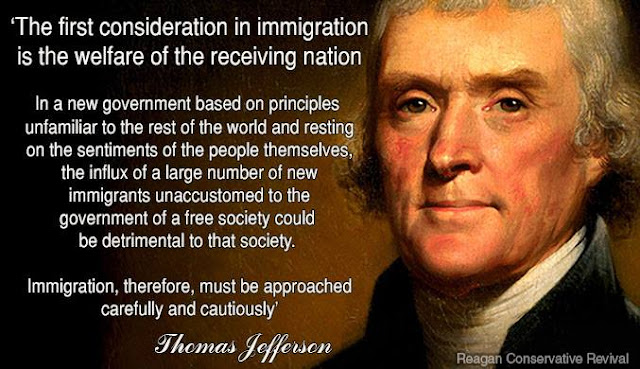 Posted by hiswiserangel at 8:04 AM

I smell Valerie Jarratt, and Cass Sunstein "nudging" the gullible public into blindly accepting the invasion...

How can you tell the government is lying? They are telling you something...

Is there anything that TJ wasn't right about?

Very true. Mom's family were migrant farmworkers, people who moved around the country picking crops when ready for harvesting. They ranged from Utah to deep south Texas. MIGRANT back then was that their move was short term.

Call a spade a spade.

Or even a gorram shovel!

I read a piece a while back and darn it I can't even find the author, much less the article itself. Badly paraphrasing, it broke down as follows:

The group of foreigners that moves to a country with the intention of assuming their culture and values are immigrants. These can safely be encouraged, no matter their race, culture, ethnicity or background.

The group of foreigners that moves to a country with the intention only of working then returning to their homeland, with no intention of assimilation, are migrants. They can be discouraged, tolerated or encouraged based on the needs of the host country.

The group of foreigners that comes to a country with the intention of remaking its culture and values and into their own are colonists. They need to be identified and denied at every turn.