Pretty good description of menopause, too 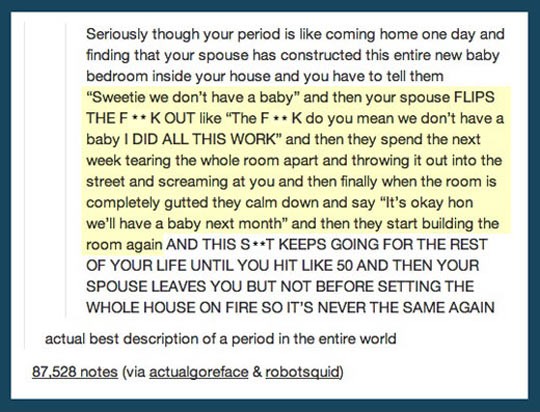 Posted by hiswiserangel at 3:26 PM

Why do they call it menopause? Does it start back up at some later date?

They call it "menopause" because "Mad Cow Disease" was already taken.

The biggest favor my ex did me was divorce me before all that started and two other men had to contend with her crazy ass.

You haven't lived until you walk down THAT aisle in the store with your wife who just had a hysterectomy and she does the "happy dance" in the isle pointing at the sanitary pads going "nya nya nya nya, I don't need you anymore!"

Then ya get to deal with the depression for the next many years because she could never have kids.

Dear Y chromosome, thanks for being there. Love, Me.

an amazing and intricate chemical/psychological process...and I'm damn glad I only get to observe (course, it's like being an observer in a war zone, you are still a target).....

One of the thousand and one reasons I could start on the roof of the town hall and shout to the world, "Thank God I'm a Man!!"

So apparently the only time in which women are sane is before they hit puberty...

Obviously we need one as President! Because...um...

Jason: Men aren't much different. Once upon a time, I could think about things other than sex and boobs constantly, and didn't start getting cranky if I had to go a week without privacy. I kind of miss it.