Yeah, I want this pretty bad 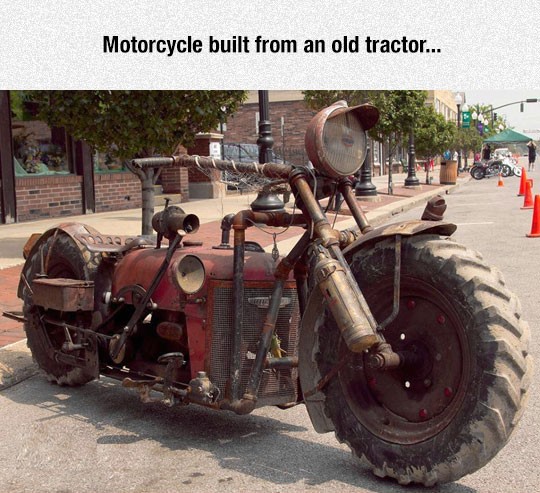 Posted by hiswiserangel at 4:58 PM

At least it is not JD green!

I don't have much money, but I would trade my left, uh, arm for this thing. I would ride it just to give the cops the willies.

I like to speed in the rain, just to make them get out of their car. haha

being about as mechanical as a ground squirrel, this kind of stuff amazes me.....
and Anon, i think it would be cool in JD Green..but, that is just my redneck aggie showing....

Go learn to weld, most local JCs have courses.
Find a tractor at a farm sale & bring it home.
Print the picture and figure out what you'll need, get the big parts going and the little pieces can be figured out later.

At the very end if you're way over your head & can't deal with it ... call it art & enter it in a local contest!

Either way you'll have tried, you'll have learned to weld (if you don't already), you'll have gone to a farm auction (they are always fun as long as it's not your farm they are selling) and you'll have a neat big bike or be an artist.

Either way it was a good month!

WHAT?!
"At least it is not JD green!"
Curses be upon your vile, heathen tongue, Anon!!!
Some peoples kids, I'll tell ya!

THIS I think might trump it - it reeks of badassery !

Rob, what makes you think she doesn't know how to weld?
Terry
Fla.

if you can't make your own or just don't want to...

I don't drive motorcycles, but that one, I would.