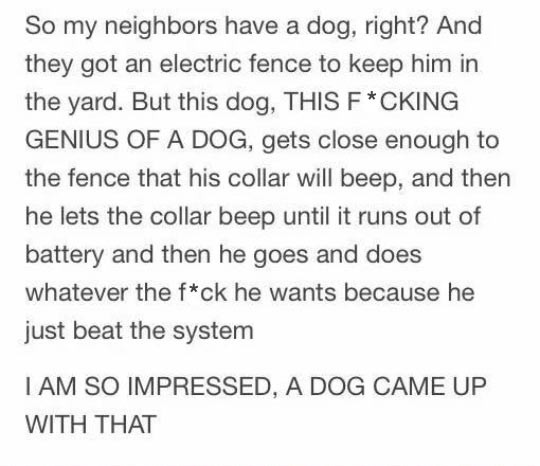 Posted by hiswiserangel at 1:30 PM

I was doing an week long concrete job one time and every morning when the neighbors left for work their white lab would come out and lay on the porch until they drove away. Once they were out of sight he'd run like hell down the sidewalk and jump into the street letting out a little yelp when he jumped. This happened every day.

He would wander the neighborhood chasing cats, taking naps and visiting our crew at lunch time. Just before his humans arrived home he would run down the street and jump back onto his sidewalk, again letting out a little yelp and then lay down on the porch until they arrived.

On the last day I asked the people why their dog did this. Turns out they had an invisible fence and that was his way of defeating it. Seems the momentary pain of a little zap was a small price to pay for his freedom.

It seems that dogs are more self disciplined than a lot of kids today. First, they can delay gratification. Or second, they are able to suffer a little in order to achieve a goal. Who knew? Oh, yeah. Parents.

had a friend who had some hogs in a pen topped with a very hot electric fence wire...one wise old boar would listen to the pulse of the charger, and, between pulses, grab the wire, rip it down and go on his merry way...( hogs are way smarter than cows, horses and most dogs)