And that's why I needed the .45ACP 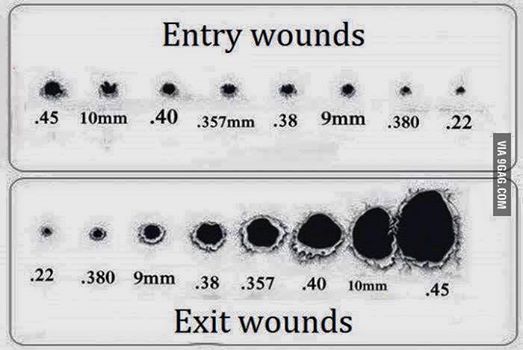 Posted by hiswiserangel at 8:24 AM

It is sad that most ammunition companies load 10mm to .40 standards. If you are unsure if you have proper 10mm rounds or 10mm light rounds you can easily check by letting an FBI agent shoot them. If the agent starts to cry and complains about his or her wrist then it is proper 10mm ammo. Just remember, a proper 10mm round has more energy at 100 yards than a 45 at muzzle.

In all seriousness people need to use what fits them and what they are comfortable with. I use the 10mm for its versatility, 135gr at ~1600 fps for people defense, 200gr at ~1200fps for hunting. Sorry, I tend to be a bit of an wise ass on caliber discussions because I recognize that in America one size does not fit all.

Angel. No matter what you do some smart assed fan boy will be right there to tell you why you're wrong. Remember this Jason fanboy. More people have died at the muzzle end of the .45 than any other hand gun in history. Myself I like the SAA in .45 Colt. With any full house bullet/load combination it will do exactly what the Army specified in 1869. "founder a running horse". ---Ray

.45.
Because having to shoot someone twice is silly.

The popularity of the 9mm in gangs is largely due to their ignorance of the metric system, and a large capacity magazine that allows them to miss more times without aiming.

That's from the same people who brought you "3st Street".

For once I will try and be grown up here. I am really asking because I am ignorant of the truth. I have bought into the modern theory that all major calibers are so close with modern bullets as to be basically the same. Now I see this chart and I am completely taken aback. It is what I always used to think when I first got into self defense, and began looking at a carry gun.

Can someone give me the truth without their bias getting in the way? I always wanted to carry a 45, but went with the 9mm as a slightly cheaper option. I have shot 45 and can most certainly handle it, I actually have several favorite options as far as guns go. But I have also standardized to just one caliber as to simplify ammo purchase and storage.

Sorry for asking this here, Angel. I just saw it here, and expect that you will get many opinions in favor of the 45, and I hope to get some truth from some folks.

One reason I don't prefer to carry a 9mm is that it's a very hot (fast) round. Plenty of opportunity for over penetration in some circumstances.
The .45 is a much slower round...not to say that it can't over penetrate too, but less of a chance.
My wife prefers the 9mm due to relatively low recoil. Of course, a .357 Mag revolver is her backup, so go figure.
Personally, I wouldn't want to get hit with ANY of those calibers.

When it comes to calibers the one you have on that you are familiar and shoot accurately is the one that gets the job done. Having a cool head and placing the first shot where you want it is what matters. Every different caliber reacts differently from every other one so outside of using something large enough to fulfill a specific need, comparing is nothing more than someone with nothing better to do than to say "mine's better" like a snotty 7-year old, then try to back it up with data. However, the huge .45 hole did make me smile!

Most ladies like to make a grand entrance...I personally prefer to leave making a grand statement...give em something to remember me by...so I will take the 45....thank you. ; P