My brand of feminism 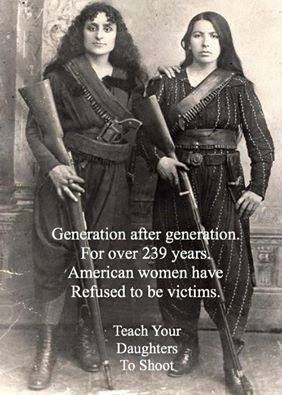 Posted by hiswiserangel at 7:46 PM

amen! that is the way a woman should roar!!

Just about 4 years ago, while I was back in Texas for R&R before Thanksgiving, my wife told me to take our two kids (27 and 23 at the time) shopping for their Christmas gifts. They all knew I would be back in Kuwait a month before Christmas and I wanted to spend as much time with them as I could. I asked, "How much am I allowed to spend on them"? and she said $500/MAX. She suggested a pistol for the boy and some high thread count linnens for Ashley. My eldest (James Matthew) had mentioned that he wanted his own pistol as he'd been luging my .40 Glock around and desired more ammo capacity and distance. He chose a decent 9mm Rugger. When I suggested Bed, Bath and Beyond to my daughter she said, "HELL NO! I want a Colt Combat Commander. Needless to say, I soon blew past that $500 right quick.
Later that day I learned that the wife meant for me to spend the $500 for BOTH OF THEM! Not $500 each!!!!!!! MY BAD!

The women may be American, but the firearms do not appear to be (can anyone identify any of them?)

I agree wholeheartedly with the sentiment, though.


They're not Americans, they're Armenians.

Close, but no cigar.