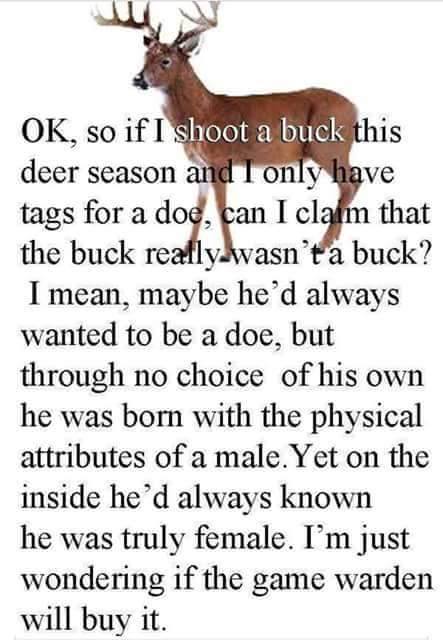 Posted by hiswiserangel at 6:03 PM

On a similar note, I'm going to start telling all of the lefties that my gun identifies as a gay wedding cake!

Not a fucking chance, unless you are in California.

So, this Cajun, who was a Baptist, converted to Catholicism, and the priest intoned "you were born a boptist, and raised a baptist, but now you are a Catholic".....
So, later, after he had been instructed in all things Catholic,some of his fellow parishioners were walking by his place on a friday, and thought they smelled the distinct aroma of grilling meat. Immediately they went into his back yard to castigate him on the infraction of "meatless fridays" As they entered the yard they heard him intone to the piece of venison sizzling on the grill, "You was born a deer, you was raised a deer, but now, you is a CATFISH!"