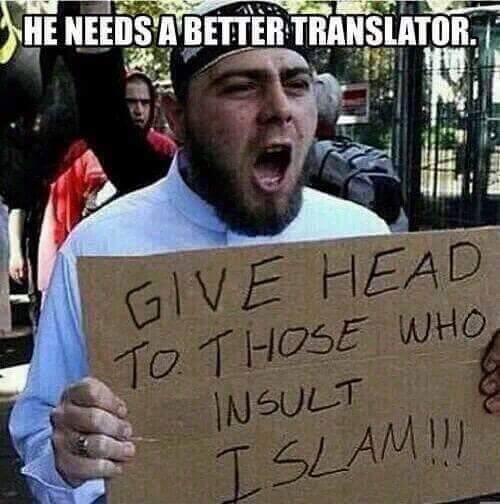 Posted by hiswiserangel at 12:03 PM

He meant exactly what he wrote.

What is truly frightening is that we can't understand what they are saying in Arabic. How many Arabic speakers are there in the western world? Not many.

Whatever to crazy uncle bubba?

Naw. Let him figure out why everyone is pointing and laughing.

Granny, there's an organization called MEMRI that monitors muslim television and provides translations. Gates of Vienna (fantastic blog) often has their work. I'm subscribed to MEMRI's youtube channel and give them a few dollars now and again. What's fun is that many individuals will give a message in English that's all Religion of Peace, and the same person will in Arabic tell the truth.

You just have to wonder if someone at Google may have planned it that way ;-)

Dang goat humpers.I bet he thinks relative humidity is the little puddle of sweat between the shoulder blades of his cousin as he pumps him in the ass.