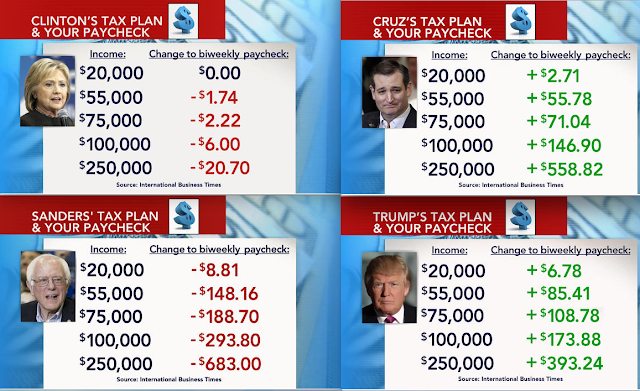 Posted by hiswiserangel at 6:58 AM

Is this a bad time to point out that Presidents don't get to have a "tax plan"? Taxes are legislated from Congress, starting as bills in the House of Representatives. Last I checked, Congress is hostile to all four of those candidates, pretty much guaranteeing that none of them will get anything if he or she is elected president.

If our country had a serious and credible news media, THEY would be pointing this out instead of me.

In order to reset to a Constitutional Republic, the whole thing is going to have to burn to the ground.

what the country needs is 1 MT enema in the middle of DC while all the political, scientific & journalistic 'elites' are in town. Preferrably with all their SJW and Communist lapdogs in tow....

cause we all know it takes radiation to remove cancer.

Wow, Bernie's plan costs a lot less than I expected.

None of it matters if spending isn't brought under control.