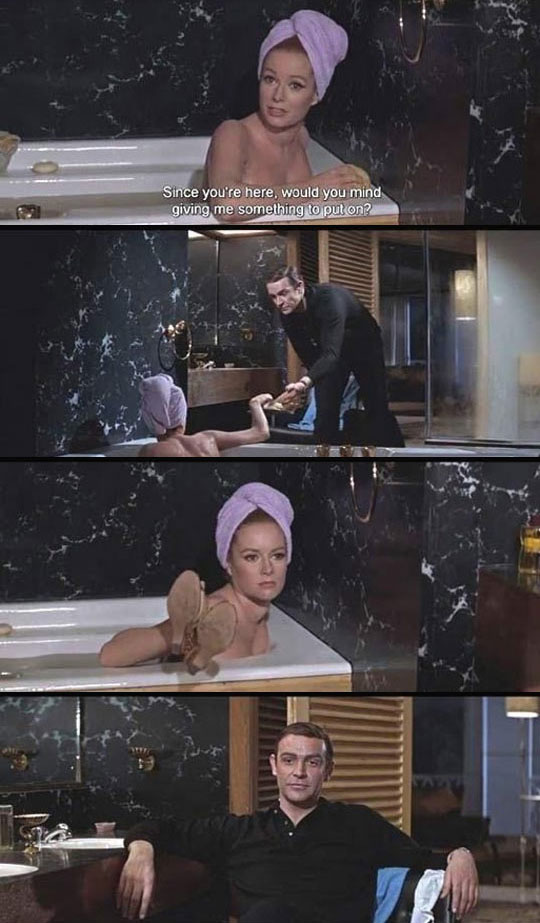 Posted by hiswiserangel at 9:03 AM

The One.
The Only.
The REAL James Bond.

And the difference in movie-making from that decade to this. Her expression is one of annoyance and a bit of frustration - today it would probably be an exaggerated pout changing to anger (feminist director) or arousal. Connery's expression is a calm, almost Zen attitude of waiting for her next move. No leer, no smirk, just, "the ball is in your court."

And I would have risen from the water, CFMs in my hand, and strutted to my closet, barefoot and dripping. Removing the turban from my head, I shake out my long copper locks and slink into a little black silk robe that barely covers my derriere.

Sorry, Sean Connery does that to me.

Wise Angel One, Sean Connery will be doing that to women as long as he lives and as long as the reruns roll......no one has ever out cooled him....

You have to see him in his early films. He's so nerdy, and uncool, it defies belief.

Luckily, he grew out of it.

PDWALkER,.. as in Darby O'Gill and the Little People? He even tried to sing, for God's sake! I was referring to him from Bond and after....