The only thing stopping us

Is the "Fucked Four". Dallas: White Guilt Liberals. Houston: Katrina refugees and Home of Sheila Jackson Lee. San Antonio: La Raza, home of the Mexican Reconquista movement. Austin: California refugees. Unfortunately, those four cities are as blue and liberal as can be and contain a large amount of the state's population and wealth. Fortunately, the majority of residentss of those four cities are dependent on other's in the Red counties for food, water and energy production. They could easily be brought to heel. Those of us who are more independence-minded are generally self-supporting and prepared for battle. 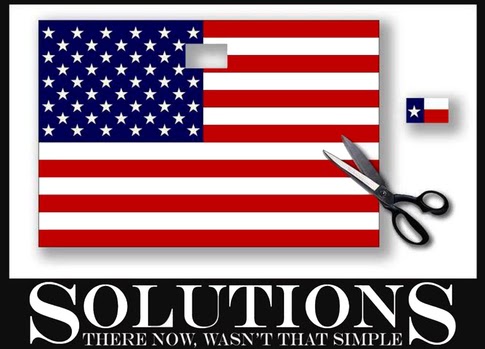 As of 2014, Texas's per capita GDP in current dollars was about US$61,200, which would make it one of the top 10 wealthiest nations on the planet, equal to Australia.  Most of this top 10 is made up of very small and geopolitically irrelevant nations (Liechtenstein, Qatar, Luxembourg, Bermuda, Norway, and Switzerland), meaning that it would be Texas and Australia as the two wealthiest among the serious players.
An independent Texas would have the highest per capita GDP in the newly reconstituted G7.  For perspective, Texas's per capita GDP is 12% higher than the rest of the USA's, 22% larger than Canada's, 28% larger than Germany's, 32% larger than the U.K.'s, 43% larger than France's, 72% larger than Japan's, and 77% larger than Italy's.
Texas is already home to a massive manufacturing sector, especially in advanced technologies such as energy extraction and the defense industries.  There would be little transition time needed for it to begin building its own military.  If Texas spent just 5% of its GDP on defense, it would have the world's third largest military expenditures, bringing it into a tie with Russia and behind only the rest of the USA and China.  Of course, Texas also has the technological know-how, manufacturing capacity, and access to fissile materials required to develop and deploy its own nuclear weapons.
Texas has deepwater ports for a blue-water navy if it chose that route, as well as for global exports.  Vast fossil fuel and renewable energy reserves are located on Texas territory, ensuring energy independence and prosperity in perpetuity.

Posted by hiswiserangel at 8:12 AM

It's just a coincidence that my in-laws live in Texas and would need Visas to visit.

Meaning they don't waste blood or gold policing the world or fighting wars that have nothing to do with defending their borders. If only the US was "geopolitically irrelevant" again, like our Founding Fathers intended. Trade with all, alliances with none.

We also have a very long, and totally undefended, land border with the rest of the U.S., and another with Mexico.

We'd probably build a wall along the latter, but the U.S./Texas border wall would be trickier. Perhaps if we could get the rest of Flyover Country to join us...

" The only thing stopping us
Is the "Fucked Four". Dallas: White Guilt Liberals. Houston: Katrina refugees and Home of Sheila Jackson Lee. San Antonio: La Raza, home of the Mexican Reconquista movement. Austin: California refugees. Unfortunately, those four cities are as blue and liberal as can be and contain a large amount of the state's population and wealth."

Change a couple names and you're describing CA.

" Fortunately, the majority of residentss of those four cities are dependent on other's in the Red counties for food, water and energy production. "

"They could easily be brought to heel. Those of us who are more independence-minded are generally self-supporting and prepared for battle."

They've been saying this for generations, first in CA, now TX, but talk's cheap. Seriously, what stopped you?

Everyone says CA is hosed (it is), and TX is great (it was). The situation in TX is the same as CA 15-20 years ago. The residents of TX are the proverbial frogs in the pot: the heat's on and it's probably too late.

If(when, I hope) Texas goes, Oklahoma,parts of Kansas, most of Louisiana, Wyoming, Montana, Western Colorado, and others in the "fly over" region will follow...just need to overcome the inertia.....

Hell yeah, TX has done it 6 times before.

Katrina "refugees" were moved into my mother's neighborhood on the west side of Houston, and the crime rate went through the roof. All denied of course by mayor White.

vaquero viejo, I'd hope for a nice wide stripe from the Rio Grande to the Canadian border, isolating the Left Coast with the Other Left Coast.

What y'all don't seem to WANT to understand is that the ONLY way to do any of this is HARD. Voting, talking and all the other "passive" ways DO.NOT. WORK. If we want liberty and safety for our children and our posterity then you have to be willing to pay for it, and by that I mean rounding up several million humans and shooting them in the back of the head. It is not only the only way that rebellion works. It is the ONLY way that has EVER WORKED. Every thing else is mental masturbation. The price of liberty is counted in mass graves, and so far I have seen damn little to make me think that there are many willing to pay that bill.-----Ray


Ray, I don't believe the original revolution left mass graves everywhere.
That's the socialist way, not ours. We shoot them in the front when they are coming for us.

If comments here are any indication, and I believe they are, there are many who stand ready, willing, and able...

pawnbroker, I'm cheered by the fact I keep running into the same people on these various websites.

Well, that and "In the end, they will annihilate themselves. While screaming that they have the One True Way To Enlightenment."

The problem wit Texas seceding is that at the moment the only real military assets it has are national guard assets. Unless the new nation of Texas (Lone Star?) confiscated all the military assets within its borders and belonging to the USA at the time of secession, it would be child's play for armed forces belonging to the folks in DC to repeat what it did in the 1860s. Even WITH all the assets and even a large portion of the active duty and reserve military members to man those assets, it would still be a difficult thing to pull off.

But the GOP heirarchy here is utterly against any such action. Additionally, I am not sure that Texas patriots who are current serving or former members of the armed forces of the US could actually take part in such a conflict. We - each of us - Officer and Enlisted - swore an oath to "support and defend the Constitution of the United States against all enemies, foreign and domestic; [and to] bear true faith and allegiance to the same;". Could we fight without being forsworn? I'm not sure.

"...Hello?" The other side said, "Is this Steven Wright?" I said, "Yes" The guy said, "Hi, I'm Mr. Jones, the student loan director from your bank. It seems you have missed your last 17 payments, and the university you attended said that they received none of the $17,000 we loaned you. We would just like to know what happened to the money?" I said, "Mr. Jones, I'll give it to you straight. I gave all of the money to my friend Slick, and with it he built a nuclear weapon, and I would appreciate it if you never called me again."

The Nuclear Key is the only thing that will unlock the door of freedom for Texas.

Old surfer; Obviously you have never been to any of the national battlefields or you would know how stupid that statement was. The most obvious and universal feature of all of the conflicts of human history is the mass grave. After the 18th century American revolution Torries were hanged or driven out without mercy. Visit any of the preserved "historic sights" in America. If you cannot find the mass grave, then its gone unmarked. But they ALL have them. You can pretend that history was "clean", but its just a fantasy. War always was and always will be an atrocity machine.

Anonymous @ 18:32, I'm more inclined to classify war as an obscenity.

Perhaps the only obscenity.

Let me know when to apply for my Texas visa. You needed Tennessee Volunteers before, you will need them again.

The Fucked Four? I suspect that all it would require to solve that problem would be some rope and lumber.